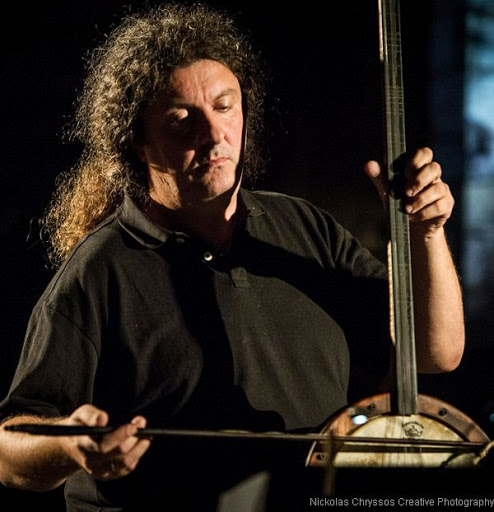 He started his music training in 1985 studying Byzantine music and received his Diploma in Byzantine Music with Honors. He has participated in a series of concerts in Greece and abroad, as well as in recordings of Greek Composers’ works. He has also taken part in recordings made for Radio (3d program), TV channels and the cinema. From 1995 he is the leading mandolinist of the Orchestra of Colors.

His interest in traditional music started in 1992 and took the form of apprenticeship next to Christos Tsiamoulis. For the last seven years, he has been teaching in the Municipal Conservatory of Patras in the Department of Greek Music, in which he also holds the position of the Head. During the same time – more specifically from 1992- he has been leading the School of Traditional Instruments which operates under the auspices of Ilia’s Church in Pyrgos and Amaliada. His appointment in the Bartholomeo and Patras Musical Schools can also be included in his teaching experience, along with his more recent appointment (starting in March 2005) in the Department of Popular and Traditional Music (Epirus Technological Institute), where he teaches the oud, yayli tanbur, organology, and ensembles.

From 2001 until today he has been attending lessons on the interpretation of eastern music modes next to Fahrettin Cimenli and Murat Aydemir in Istanbul. At the same time, he has been attending a series of seminars on oud, saz, afghani rabab, as well as composition and orchestration in the context of the “Labyrinth” Musical Workshops organized in Houdetsi.

In April 2000 he founded the ensemble ‘Romioi’, which has won excellent critics for its performances of Ottoman Music in various places (Patras, Athens, Simi, Catelorizo, Messologi). Recently and in cooperation with Markos Skulios, Tolis Tsardakas and Panos Poulos founded the Ensemble of the Workshop of Eastern Music in the Department of Popular and Traditional Music.

His CD entitled “Wanderings” (in cooperation with the singer Dora Petridis) has been in circulation from the beginning of May 2004. His compositions include music for theatre (‘’ The History of a captive”, ‘’Staxtomazoxtra’) and “The Message of the Prince” (with Christos Galanopoulos). In 2007 he published (in cooperation with Vassilis Vantarakis) a collection of 200 rebetika songs of the Civil War Period transcribed in the modal system. The collection was published by Fagotto Editions (incorporation with the Department of Popular and Traditional Music (Technological Institute of Epirus).